A new form of storytelling

Who hasn’t dreamt of having the chance to witness the step-by-step creation of an animated film just once? To experience the magic moment when a drawn character springs to life for the first time? Live animation cinema provides a deep look into this process right before the audience’s very eyes, starting all over from scratch every night. While the viewer watches a cartoon film, they can simultaneously follow how it is animated, cut, voiced and scored live. In sputnic’s fantastical stories, the animation stands, the hand-made models and hundreds of animation boards all play a role in enhancing the magic of live motion images. Live animation cinema combines animated film with puppet theatre and acting in an extraordinary performance. 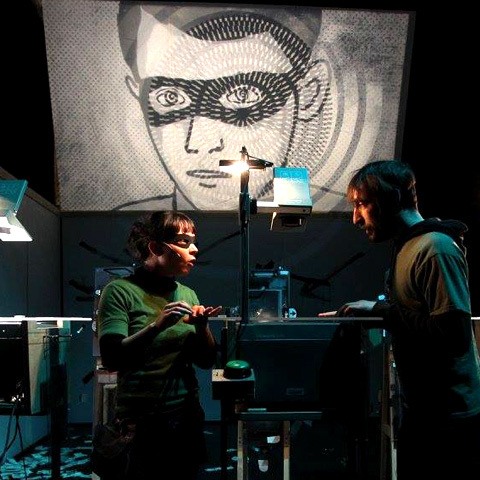 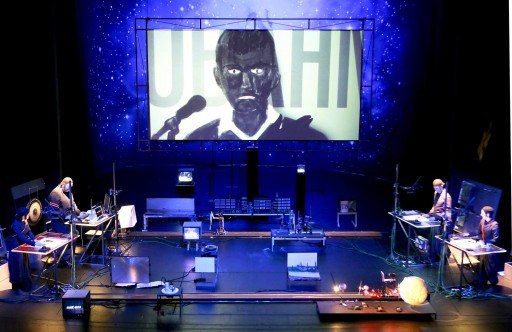 A masterpiece of multi-tasking.

An overpowering theatrical event that bewitches both eyes and ears!

Erases the boundaries between theatre, film and performance.

Possesses all the charm of a conjurer’s performance.

The first feature-length animated film of this kind was DIE MÖGLICHKEIT EINER INSEL  (THE POSSIBILITY OF AN ISLAND, based on the novel of the same name by Michel Houellebecq), which celebrated its premiere at Dortmund’s City Theatre in March 2015. The production was honoured with the Dortmund Critics’ Award for 2015. The second production of this type, OUT OF CONTROL, treating Batman and the dark web, followed in 2016; this piece was realised by sputnic for Moks - Junges Theater Bremen in collaboration with kainkollektiv.  We are currently working on our third live animation cinema production, DER FUTUROLOGISCHE KONGRESS (THE FUTUROLOGICAL CONGRESS, based on the novel of the same name by Stanisław Lem), which is set to premiere at Dortmund City Theatre on June 11th 2017. Planning is in progress for further productions.

Since its founding in 2004, the artist collective sputnic has been developing short and explanatory films utilizing classical animation techniques as well as video design for international theatre productions. The concept for this live animation represents a combination of these two creative disciplines. sputnic is responsible as a team for the “screenplay”, the stage design, the animation and execution ideas and of course for the direction as well.

The “animation plates” are primarily drawn by illustrator Julia Zejn. A rotating team of designers, set builders, illustrators and musicians assist in realising the elaborate productions on site at the theatre in question over the course of a 6 to 8 week period.

Please feel free to contact us if you are interested in presenting a live animated performance at your institution or venue, or if you would like to receive additional information regarding our pieces or this new art form. We would be happy to answer any and all inquiries